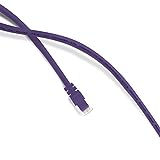 Reliability is paramount when it comes to Cat 5e networking cables, and GearIT understands this. GearIT brand Cat5e networking patch cables are built to provide premium, reliable performance for the price of a generic.

UTP Unshielded Twisted Pairs The effectiveness of UTP cable design which uses Twisted Pairs without the need for additional shielding have allowed this type of cabling to be the most cost-effective solution available for any type of advanced local area network connection and made it an industry standard for a wide variety of applications.

Drivers built in — no driver install required — on Windows 10 and 8, Mac OS 10.6 and newer, Nintendo Wii, Wii U, Linux 2.6.35 and newer, ChromeBook, Chumby, and some other systems. On Windows 7, Vista 32/64-bit drivers are automatically provided via Windows Update. Windows XP, 2000, ME, and 98SE require driver install via download or included disk. Source code/driver available for Linux kernels 2.6.9 – 2.6.34.

Not supported on ARM-based Windows, including Surface RT and Surface 2. Not compatible with Apple iOS or Amazon devices. See plugable.com/products/usb2-e100 for an updated list of compatible Android devices.

Wired Ethernet via this adapter provides faster and more reliable network access than typical 802.11 wireless networking (up to 2-3x as fast). Particularly helpful for web video, downloads, and streaming.  Useful to replace a broken network port, participate on multiple networks, or give virtual machines their own physical network connection.

This website uses cookies to improve your experience while you navigate through the website. Out of these, the cookies that are categorized as necessary are stored on your browser as they are essential for the working of basic functionalities of the website. We also use third-party cookies that help us analyze and understand how you use this website. These cookies will be stored in your browser only with your consent. You also have the option to opt-out of these cookies. But opting out of some of these cookies may affect your browsing experience.
Necessary Always Enabled

Any cookies that may not be particularly necessary for the website to function and is used specifically to collect user personal data via analytics, ads, other embedded contents are termed as non-necessary cookies. It is mandatory to procure user consent prior to running these cookies on your website.